JENNIFER GETS HER MAN

Jennifer Lawrence has made her relationship official with director boyfriend Darren Aronofsky. 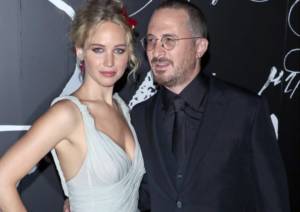 Jennifer stars in Aronofsky’s new psychological horror film ‘Mother’ and they reportedly started an official relationship after filming wrapped at the end of last year. To date they have managed to avoid discussing or photographing the romance. However, that all changed at the New York City premiere last month where the new couple were draped all over each other on the red carpet.

Darren who is 20 years older that said of his Oscar-winning girlfriend: “I don’t know what makes her great – maybe it was her parents, maybe it was the Kentucky water. I have no idea, but she’s, like, a once-in-a-generation talent, and just a whirlwind and a hurricane and an earthquake and a thunderstorm of talent.”

And Jennifer is equally as praising, saying, “I mean, his point of view, his artistic uniqueness. He’s just brilliant. Incredibly instinctual.”

In August this year Jennifer was linked to ‘Passengers’ co-star Chris Pratt and reports claimed that she may have been the reason actor Chris was separating from his long term partner Anna Ferris.