Former ‘EastEnders’ actress Daniella Westbrook has confirmed she has been diagnosed with womb cancer and fears she will suffer the same fate as her good pal Jade Goody.
Daniella, 44, will have an emergency hysterectomy to try and stop the cancer spreading in one week. She admits she is “terrified” by the thought of dying because of leaving her children behind – Kai (21) and Jody (16). Like her friend Jade who passed away in 2009 after a short battle with cervical cancer leaving two young sons without their mother.
Daniella, who is a regular in Marbella, has said she will fight the disease. “Getting this diagnosis has made me realise I don’t want to die. I have to fight, I know I have to get up and battle this for the sake of my kids.” 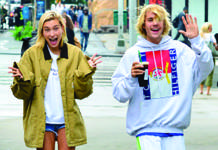